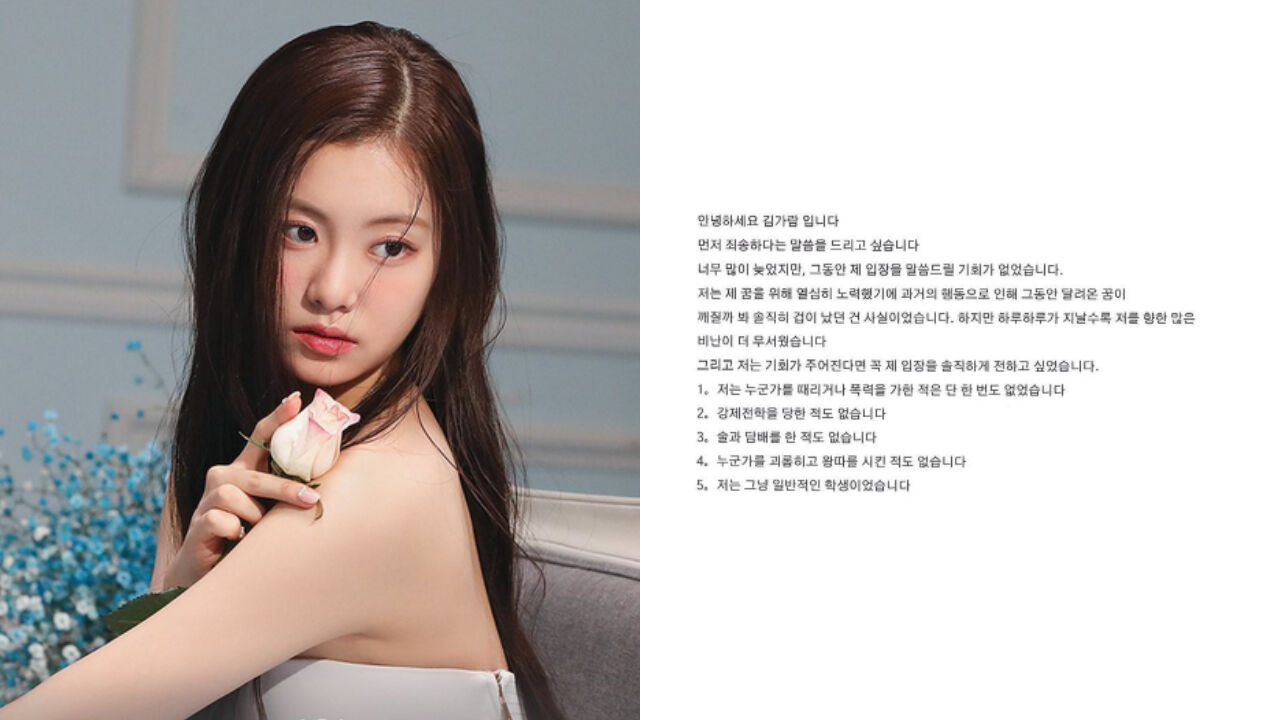 Back in July, LE SSERAFIM's management agency SOURCE MUSIC/HYBE announced that Kim Garam will no longer be a part of LE SSERAFIM.

Even before the group's official debut in May, Kim Garam has been at the center of controversy after being accused of being a school bully in middle school.

As the controversy continued to snowball, with fans asking the agency to kick out Kim Garam, the agency ultimately decided to terminate their exclusive contract with Kim Garam.

Then on August 10, an individual claiming to be Kim Garam's friend posted a letter from Kim Garam.

Along with the letter, the account shared documents about Kim Garam and her friends' case, written by the school violence committee.

In the letter, Kim Garam wrote:

Hello, this is Kim Garam.

First and foremost, I want to say I'm sorry.

I know that this is very late, but I didn't have the chance to talk about my position.

I put much effort to achieve my dream, so it's true that I was afraid that the dream that I ran toward would break into pieces because of my past actions.

But I was more afraid of the criticisms that snowballed as the days passed, and I really wanted to share my side of the story if I was given a chance.

1. I never hit anyone or inflicted violence on someone, not even once.

2. I was never forced to transfer from one school to another.

4. I never bullied anyone.

5. I was just an ordinary student.

The school violence committee incident occurred between March and May of middle school when Yoo (Kim Garam's former classmate who first brought up her school bullying controversy online) uploaded photos of my friend in underwear and talking behind her back.

While I was arguing with Yoo, helping my friend who was a victim, I started to curse.

At the time, I was not aware of the impact of the size difference of the groups, so I did not deeply think that arguing with Yoo was wrong.

I thought it was the right thing to do to help the victim, and I didn't realize the seriousness of the actions because we felt it was rightful to do so.

Looking back, I was very immature and childish.

Friendship was the most important thing to me at that time, and spending times with friends was the most enjoyable thing.

The method of my actions was wrong. There were many mistakes that I made, but I don't want to hate myself for that time.

My parents often told me not to ignore a friend who needs help or in trouble. I'm still holding onto that principle, even at this moment.

From now on, I will try to live harder so that my life in the future can shine.

Debuting was the time that I fought for my dreams. The two weeks after the debut were like a dream for me, but it will be remembered as a time I will never forget in my life.

I will try my best to become a better person, and I'm forever grateful to my precious fans who love and showed support for me.

I was able to endure thanks to the constant support of the fans.

I will definitely work hard. Thank you for reading this long letter.