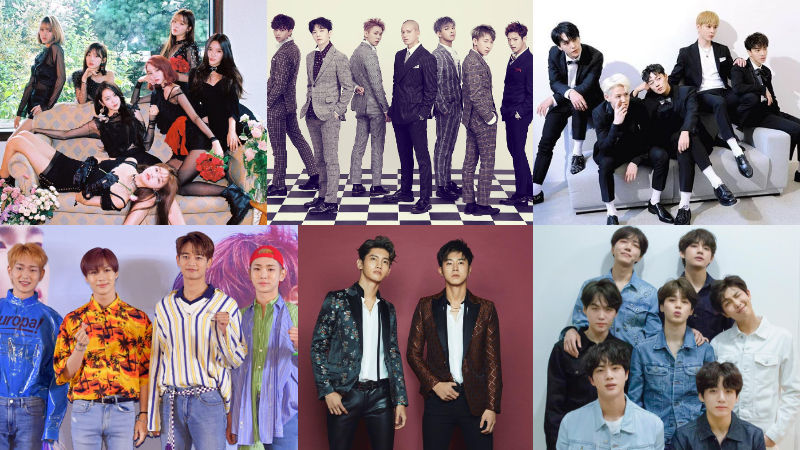 Name is a great way to express one's identity and make a good first impression.

For this reason, most of the K-pop groups go through a considerable amount of research and explore with different ideas to come up with a name that fits them perfectly and could show their color at the same time.

But not all names managed to make the cut since there were some shockingly tacky and lame names which were not only inappropriate, but also failed to grasp the very essence of each group.

Let's take a look at each one of these six K-pop groups, and find out the story behind their name!

The members of OH MY GIRL had to come up with at least five names in the process of choosing the group's name according to its members.

During one interview with the press, the members revealed, "Names like 'Puzzle', 'Marshmallow', and 'The Unknown Girl' were a possible candidate."

They added, "But we wanted something more lovely and 'OH MY GIRL' sounded quite lovely after hearing it for a few times."

It seems like BTOB had a pretty big dream before making its debut as a K-pop boy group.

In one episode of SBS' variety show 'Master in the House', BTOB's Yook Sungjae revealed the story behind the group's name and added that its initial stands for "Born TO Beat".

Then, he said that he almost made his debut as a member of 'Arirang' if it wasn't for 'BTOB'; since the members thought it would be a good idea back then because the song 'Arirang' has always been considered as an unofficial national anthem of Korea.

The members of K-pop boy group Highlight revealed that they thought about settling on some pretty unorthodox names before deciding to go with their current name.

When the host Yoo Hee-yeol of KBS' music show 'Yoo Hee-yeol's Sketchbook' asked the members how did they come up with their name, they answered, "Son Dong Woon did but it took less than 10 minutes and it was the name of our last album before we change our name."

Yang Yoseop added, "Before 'Highlight', there were names like 'Gold Silver Bronze Eagle', and 'Genghis Khan'."

K-pop boy group SHINee also has a pretty funny story behind its name.

According to the members, these talented boys were called 'SM5' instead of 'SHINee' about 11 years ago.

When SHINee made appearance at KBS' music show 'Yoo Hee-yeol's Sketchbook', the members said, "Lee Soo-man, the head of our management agency (SM Entertainment) gave us that name. It was not an official name, but we had to be there when he called 'SM5'."

Later on it turns out that 'SM5' was a compound word of SM and number 5, the company's name and the number of the members.

According to the members of K-pop boy group TVXQ!, they had to go through a lot of modifications before landing on their current name.

The members revealed that there were three names before TVXQ!―'A Whale Who Eats Legends', 'Oh-jang-yook-boo (internal organs)', and 'Dong-bang-bul-pae (master of martial arts)'.

But because of the various reasons such as the way it sounded in Korean and the way it looked in Chinese character, TVXQ! eventually had to slightly alter one of its final candidates (Dong-bang-bul-pae) and create a new meaning out of it.

BTS, a K-pop boy group which garnered a worldwide attention with its transcendent performance had two more names before making its debut.

When BTS made appearance in Mnet's talk show 'YamanTV' back in 2015, BTS revealed that its name might have been 'Big Kids' or 'Young Nation' if the members failed to find to the name 'BTS'.

After explaining the story behind its name, J-HOPE added, "I think 'BTS' sounds better after hearing all those names."