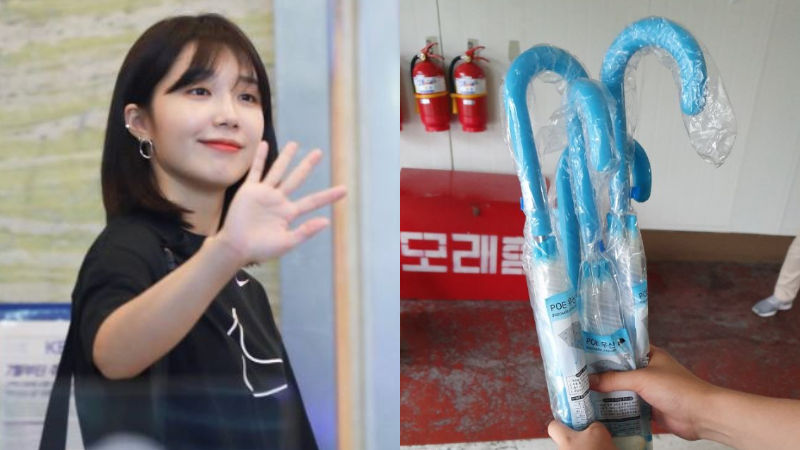 K-pop girl group Apink's member EUNJI moved her fans who came to see her at the broadcasting station by giving them a surprise gift which showed how much she cares about her fans.

On July 15, one fan posted a few pictures of umbrellas she got from EUNJI along with a caption saying, "We were avoiding the rain in a parking lot and one car just stopped in front of us. Then, EUNJI got out of the car, gave us these, and said that we should take these home."

The fan continued, "It seemed like she ran through the rain to buy us these because her bangs and clothes were all wet. After giving us these umbrellas, she lowered the window to say goodbye to us. I love her like crazy."

It appears that EUNJI could not stop thinking about her fans who got stuck in the parking lot because of the heavy rain and wanted them to get home safely.

According to the fans who were at the site, EUNJI tried to wave her hands at them until they got out of her sight even though they kept telling her put her hands in.

Whilst describing the sweet and considerate gesture EUNJI has shown, her fan added, "She finally put her hands back in the car and closed the window but she lowered the window again and said goodbye to us with the most cheerful voice in the world. I mean, how could I not love this girl?"

After hearing this story, her fans commented, "Well, get in line because I'm her biggest fan.", "If that was me, I would totally pass the umbrella down to my children", "She truly is beautiful inside and out", and many more.

Meanwhile, EUNJI will kick off her solo concert 'YEOREUM. I' with the concert in Seoul which will be held on August 3 and 4.