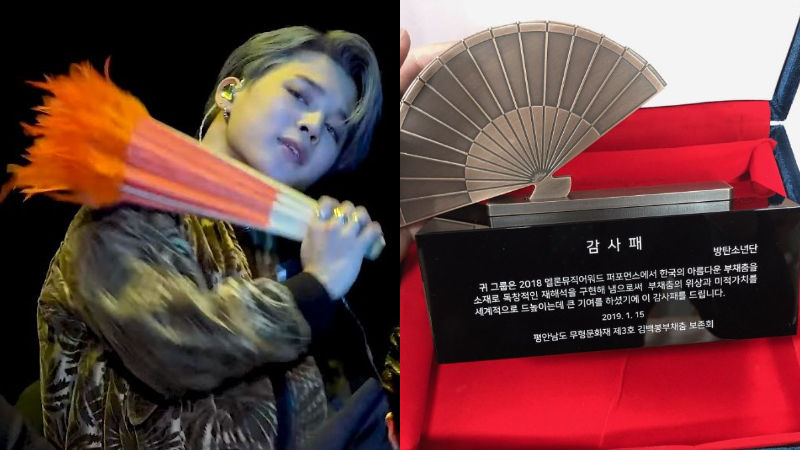 On February 27, JIMIN posted a picture of an appreciation plaque on the group's social media account which he received from 'Kim Baek-bong Korean Fan Dance Conservation Society' (literal translation).

Kim Baek-bong's fan dance was appointed as Pyongannam-do's intangible cultural property No.3 back in 2014.


Along with the picture, he wrote, "Today, I received many kinds of big awards. I truly am grateful and hope that I could share more with you through good music and performances. Thank you for always supporting me. I love you with all my heart."

Back in December 2018, JIMIN swept the entire audience of '2018 Melon Music Awards' off their feet with his amazing fan dance he showed at the stage of 'IDOL'.

Afterwards, his performance gained a worldwide attention and went viral through social media.

The conservation society wrote on the appreciation plaque, "BTS reinterpreted Korea's beautiful fan dance in its own words and by doing so, it played a huge role in raising the aesthetic value and the status of it."

An Byungju, a dance professor at Kyung Hee University and the daughter of Kim Baek-bong said during an interview with Edaily, "We all agreed that BTS' inspirational stage contributed in raising the awareness of Korean traditional arts."

She continued, "In this day and age where everything changes so rapidly, the fact that BTS who has a worldwide reputation played a part in preserving and improving traditions almost felt like a cultural independence movement."