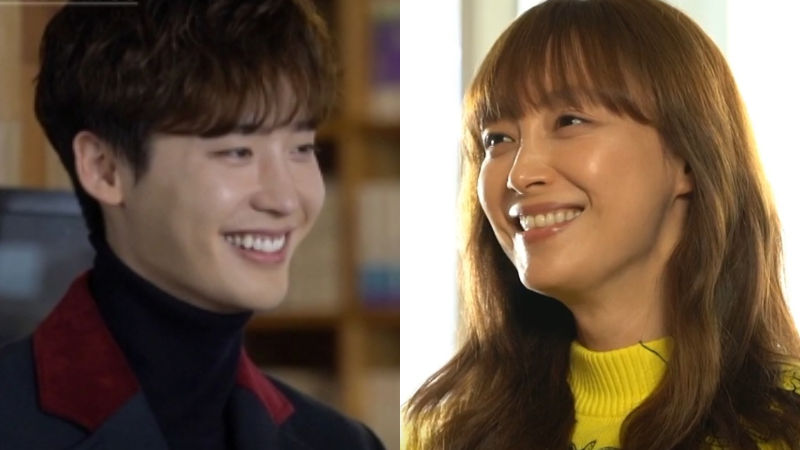 Korean actor Lee Jong Suk turned into an adorable fanboy in front of Lee Nayoung, his co-star and a woman of his dreams.

On January 16, the production team of tvN's upcoming drama 'Romance Is a Bonus Book' dropped the video of Lee Jong Suk and Lee Nayoung which contained the behind scenes of their filming site.

In the video, the drama's two protagonists (Lee Jong Suk and Lee Nayoung) and the supporting actors were focusing on filming the teasers of their drama.

But Lee Jong Suk who was filming his first encounter with Lee Nayoung at the library could not stop laughing because he was too shy to look directly into her eyes and do as what the script says―smiling at her.

Then, Lee Nayoung tried to help him relax by slightly slapping him on the back as a joke.

After a few times, Lee Jong Suk finally managed to finish shooting without laughing but his ears turned all red out of shyness by the time the director said, "Cut!"

The public's expectation toward their upcoming drama has skyrocketed since the way Lee Jong Suk looked at and behaved in front of Lee Nayoung was unbelievably cute and made them want to catch up with every episode.

'Romance Is a Bonus Book' will cover the story between an ex-copywriter 'Kang Dan-e' (Lee Nayoung) who used to be a hot shot back in the days and a genius writer 'Cha Eun-ho' (Lee Jong Suk) who also happens to be the youngest editor of all time.

Meanwhile, the drama's first episode is scheduled to be aired on January 26.